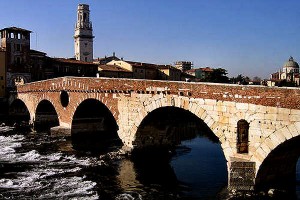 Verona , thanks to its strategic position at the center of a road network consists of the streets Postojna , Gallica and Claudio Augusta , in Roman times it was one of the most important cities . Even today in Verona , the remains of its Roman past are so numerous and well preserved as to make the Italian city with the most visible artifacts after Rome . An amphitheater, triumphal arch , two doors , a bridge, a theater and even mosaics, paving of roads, walls , Verona is a true outdoor archeological museum , with exhibits ranging from the first Republican era to the era of early Christian .
Only accompanied by a tour guide will be able to discover, in two hours and a half, all the treasures of Roman Verona .

Archaeological Museum of the Roman Theatre. Mosaic floor of the second century AD found in Valpolicella and feminine classic statue , perhaps a copy of a model of Phidias .
The route , starting from the arch of Gavi , the arch celebrating an important Roman family of the first century AD, is directed along the route of the Postojna , towards the center of the city following the road that even two thousand years ago a visitor would have been to get to Verona. Passed under the Porta Borsari to the sides , in the basement of palaces latest you can still see the remains of the Roman wall , you enter the ancient decumano , one of the two main axes according to the planning of the second century before Christ . Decumano is the path along its entire length until reaching the Adige river , just where the bridge once stood Postumius leading the way on the other side and allowed her to continue on its path towards Aquileia. Postumius Today the bridge is gone, but there is still , though with heavy signs of aging, floods and wars , the other Roman bridge, the Ponte Pietra . On the hill beyond the Adige you can still see the bleachers , the arches and the remains of the theater scene in the first century BC, still used in the summer for the theatrical season of Verona Jazz festivals and concerts .

The tour then continues to the city center where, through the large portholes open in a courtyard of the palaces Scala you can admire the beautiful mosaics of a Roman . From here you can go to Piazza delle Erbe, the ancient forum which still retains part of the form that had more than two thousand years ago.
Took the thistle , the other road that started from the hole , you get to the other end of the Roman city , closed door Leoni , with its double-sided , republican and imperial , and the remains of defensive towers . Along the route of the ancient wall, the remains of which are still visible in some places , then you reach the Arena , the greatest monument of Roman Verona , amphitheater from the first century AD so well preserved that it is still used today for the famous opera season in the summer.

The guided tour of Roman Verona can be integrated with a visit to some of the city’s museums , including the Archaeological Museum at the Roman Theatre and the Museum of Lapidary Maffeiano . Booking well in advance is also possible to visit the remains of Roman Verona underground , stored at various sites below the street level and in the cellars of buildings, public and private. For example the ruins of the Capitol under a famous restaurant , or domus more mosaics in the basement of a bank.