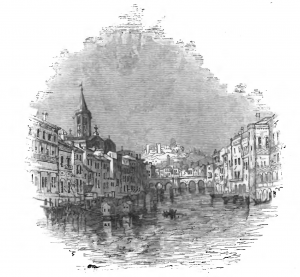 Accompanied by a guide, a journey to learn about Shakespeare’s Verona .
The tragic story of Romeo and Juliet is a legend, no one can say with certainty that the two star-crossed lovers of Verona are actually lived . However, as in all the legends , there are many elements of the story that are reflected in reality. History are the struggles between Guelphs and Ghibellines that bloodied Verona in ‘200 , as well as the existence of the family of Monticuli , or Montague, who lived in the real medieval fortress that is the so-called House of Romeo .

The family coat of arms of the two noble families of the Montagues (or Monticuli ) to the right , and the Capulets (or Cappelletti) on the left. Ancorda today , in what is considered the House of Juliet , you can see a relief with the image of the noble family .

Dante , who was in Verona in the years in which you think that the story is happened in the sixth canto of Purgatory writes ” Come see Montecchi and Cappelletti , Monaldi and Fillippeschi , uom without care : sad already , and these doubt ! , “referring precisely to the clashes of factions that bloodied medieval Italy , and the doubt remains about the reasons for the sadness of the two families of Verona . 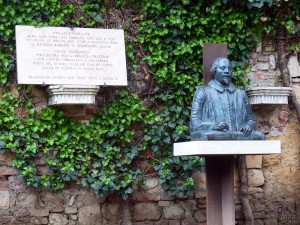 The famous tragedy by Shakespeare then , was not the fruit of the imagination of the famous English playwright , he in fact , although not never been to Italy , was inspired by some versions of the story that has long circulated in Italy and in Europe , the most famous ones by Luigi da Porto and Matteo Bandello , and who evidently were based on some oral tradition.
In the various versions , references to historical events and physical locations of Verona are frequent , so in the course of the centuries , the tradition has identified some buildings in the places that saw the tragedy of the unfortunate young people consumed : the House of Juliet, with the coat of arms Capulet family (or Cappelletti , according to Dante ) , the Romeo’s house , the door that perhaps thirteenth century saw Romeo away into exile , Juliet’s tomb , at the only Franciscan convent which straddles the ‘300 existed outside the walls.

All these places can be visited in a tourist route created ad hoc , and many of them have been asked a number of plaques in memory of the story . And ‘ possible to visit the places Shakespeare’s Verona with a sightseeing tour specially arranged them traces reviewing all historical references and work of the great English playwright . A tour guide will accompany you showing you the stories and legends of the city . shakespeare in verona – bed and breakfast agli aceri